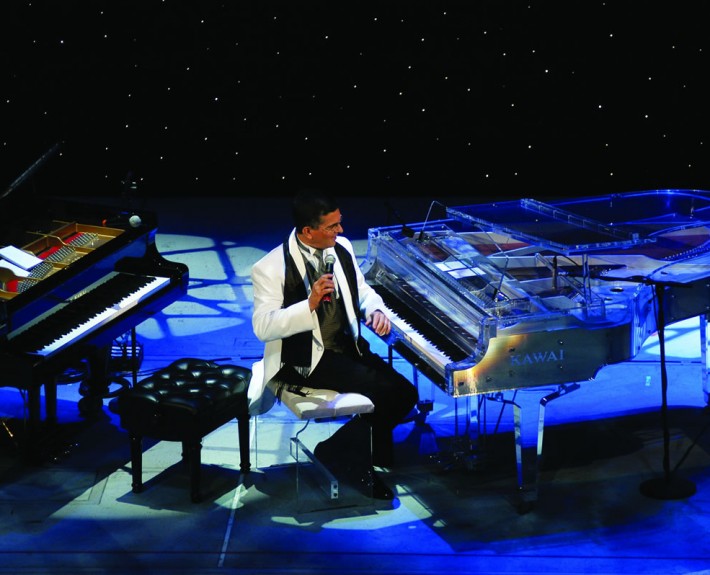 Marvin A. Goldstein was born in 1950. He is an internationally acclaimed pianist, piano performer, arranger, music producer, composer and entertainer for over 50 years. At the age of nine, he began his music training and, at the age of 18, he was awarded a music scholarship to Tel Aviv University School of Music in Israel. His studies continued at the famed “Mozarteum” of Salzburg, Austria and at The Florida State University in Tallahassee, Florida. where he completed a Bachelor and Master of Music degrees.

Marvin’s greatest passion is his Peace with Music program. His goal is to bridge the cultural, religious and political differences of people everywhere through the medium of music. With Mr. Goldstein’s rich and extensive association with middle-east performers, he recently completed a highly successful three week tour in Haifa and Jerusalem, Israel, bringing Arabic, Israeli and American Jazz vocalists together in a Peace with Music concert.

Goldstein has traveled extensively performing in places such as Jerusalem, Anchorage, Oahu, Copenhagen, London, and throughout Canada and the continental United States and has recorded over 50 compact discs. Genres include popular music, patriotic melodies, show tunes, sacred music and love songs. As a National Keyboard Artist with the Kawai America Corporation, Goldstein has arranged 15 piano solo arrangement books, including many sacred hymns. His most recent releases include a CD with Grammy winner Billy Dean and former NBA star Thurl Bailey.

Goldstein has been a guest lecturer at Education Week on the Brigham Young University campuses in Provo (Utah), Hawaii and Idaho.

With his unique ability to draw the audience into the music with the emotions a particular piece may invoke, Marvin Goldstein’s music touches each and every one. He can truly make the piano come alive.

Jason and his team at Aingeal Music Worldwide work with artists to help them ensure their music is shared with the world. If you have a question about Marvin’s digital music or past library of songs, be sure to contact Jason and his team. You can reach him at JasonTonioli@gmail.com or AingealMusicWorldwide@gmail.com